Browse the glossary using the index:

Separation is based mainly on differences between the adsorption affinities of the sample components for the surface of an active solid.

This expression characterizes the particular variant of chromatography in which the unique biological specificity of the analyte and ligand interaction is utilized for the separation.

Chromatography is a physical method of separation in which the components to be separated are distributed between two phases, one of which is stationary (stationary phase) while the other (the mobile phase) moves in a definite direction.

The tube and the stationary phase contained within, through which the mobile phase passes.

Covalent bonds between two atoms consist of a shared pair(s) of electrons. 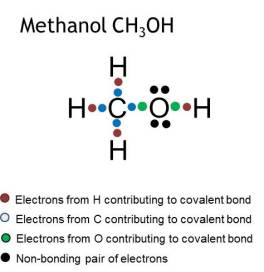 Concentration of a detergents above which the detergent forms micelles.

Detergents are amphiphil molecules, i.e. consisting of a hydrophilic and a hydrophobic part. They are able to align so as to form micelles with the hydrophobic part of the detergent orientated to the inside of the micelle to avoid interaction with water.

They are e.g. used for the solubilization of hydrophobic compounds, the denaturation of proteins or the isolation of transmembrane proteins (which contain hydrophobic areas physiologically located within the cell membrane). 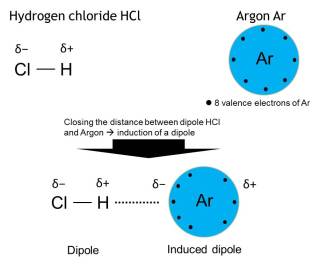 Ability of an atom or functional group to attract electrons towards itself.

The process of passing mobile phase through the column to transport solutes down the column.

A separation technique in which the mobile phase is a gas. Gas chromatography is always carried out in a column.

The procedure in which the composition of the mobile phase is changed continuously or stepwise during the elution process.

Sample disruption and therewith homogenization, e.g via mechanical methods like milling or ultrasonic. With homogenization the sample should change its physical properties and simultaneously maintaining its overall chemical composition.

Interaction between two polar molecules between a hydrogen and a electronegative atom like O, N or F.

→ Ion are atoms that has lost or gained electron(s)

Ion exchange chromatography allows the separation of ions and polar molecules. It can be used for all kind of charged molecule, e.g. proteins, amino acids. 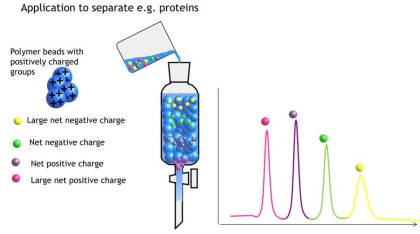 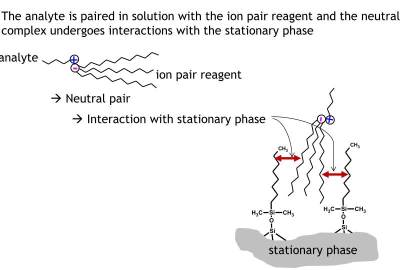 Bond or electrostatic attraction between a positively and negatively charged ion.

The procedure in which the composition of the mobile phase remains constant during the elution process.

Depending on the proteins amino acid composition, they carry a specific surface charge, which is affected by changes in pH value.  Using a strip gel electrophoresis with pH gradient, proteins can be separated according to their isoelectric point at which they carry a zero net charge.

A separation technique in which the mobile phase is a liquid. Liquid chromatography can be carried out either in a column or on a plane.
Note:  Present-day liquid chromatography generally utilizing very small particles and a relatively high inlet pressure is often characterized by the term High-Performance  (or High-pressure) Liquid Chromatography, and the acronym HPLC.

Transfer of compounds from one solution (feed solution) to another solvent, which is immiscible with the feed solution. This method separates compounds based in their solubility in two different immiscible liquids.

log P refers to neutral, non-ionizable molecule species. Lipophilicity/ hydrophilicity of a molecules is determined according to its distribution in a biphasic system, consisting of two immiscible solvents (e.g. octanol and water

Lyophilization is a dehydration process (removal of water) to preserve material, e.g. food. At first the material is frozen, followed by the reduction of the surrounding pressure.The frozen water in the sample is sublimated (direct transfer from solid to gas phase).

Gel electrophoretic separation of non-degraded proteins in their native conformation. The proteins are separated according to their charge, mass and spacial extent.

Northern blot method is employed for the gel electrophoretic separation of RNA, which is then blotted onto a membrane (compare also “Western blot”). The target RNA is detected by adding specific RNA probes, which bind to the target RNA. Those probes are either labelled with radioisotopes or coupled to a reporter enzyme, whereby a detectable signal is generated by means of enzymatic substrate degradation.

pKa is the pH at which the abundance of ionized and non-ionized from is equal e.g. acetic acid (CH3COOH) with a pKa of 4.8.

Polarity describes the electric charge distribution within a molecules, which is dependent on the electronegativity of its containing atoms. Polar molecules can form e.g. hydrogen bonds. (compare slides „Polarity Basics”)

An elution procedure used in liquid chromatography in which the mobile phase is significantly more polar then the stationary phase, e.g.,  a microporous silica-based material with chemically bonded alkyl chains.
Note:  The term “reverse phase” is an incorrect expression to be avoided.

Gel electrophoretic separation of denatured proteins. Denaturation and separation is achieved through the addition of the negatively charged detergent SDS.

Solutes contained in a sample are separated from from each other according to their chemical and physical properties. Samples can be purified and concentrated or an analyte of interest can be isolated.

The analyte remains on the column (high affinity to stationary phase), whereas contaminants pass through, are collected and discarded. The analyte can then be eluted by washing the column with an appropriate solvent, in which the analyte will dissolve. 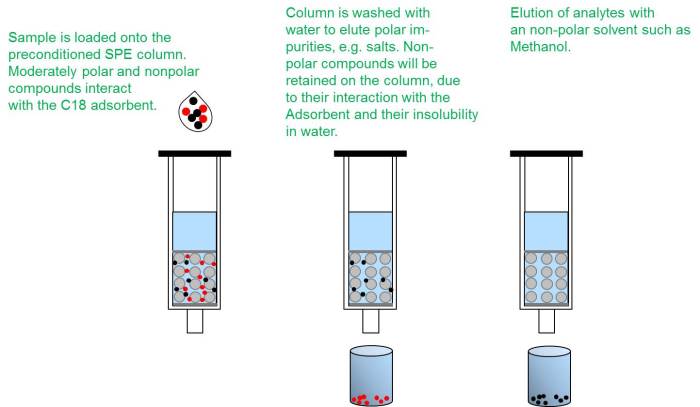 The solubility of a solute (= solved compound) highly depends on its properties (e.g. its polarity) and the properties of the solvent as well as on the temperature, the pressure and the pH („Like dissolves like”). A substance can be solved up to a specific and solute- and solvent dependent maximum concentration (=saturation concentration).

The elutropic series of solvents reflects the ability of a solvent to elute various solutes from a given sorbent („eluting power”/„solvent strength”) (compare slides „Chromatography”). Although the eluting power depends on the stationary phase as well as on the compounds, the order is usually from polar solvents (e.g. water or methanol) to non-polar solvents (e.g. hexane).

Southern Blot is employed for the gel electrophoretic separation of DNA. For this purpose the DNA is cutted into small fragments, which are then separated. The next steps involves the blotting of separated DNA fragments to a membrane. Labelled probes, which bind specific DNA target sequences, are added to be able to detect the respective DNA fragments of interest.

The stationary phase is one of the two phases forming a chromatographic system. It may be a solid, a gel or a liquid. If a liquid, it may be distributed on a solid.

Electrons of the atoms outer shell that participate in the formation of a chemical bond.

An equation used to explain band broadening in chromatography.

Method consists of a gel electrophoretic separation of proteins followed by the blotting of separated proteins onto a membrane. An antibody is added which specifically binds the target protein. A second antibody, on which a reporter enzyme is coupled, binds the first antibody. A detectable signal is generated by the enzymatic degradation of an added substrate and the generation of the respective product.

Safer and ad-free version of Analytics+

We moved to analyticsplus.org. The old version will be taken off the web on May 1, 2020.

Except as otherwise noted, this work is licensed under a Creative Commons Attribution-ShareAlike 4.0 International License.